Now I’m not one to blow my own trumpet but I have to say, we absolutely smashed this one. Hand on heart, I think this is THE BEST wedding photography a Stockport Town Hall Wedding Photographer has ever produced. Ask any wedding photographer who has photographed a wedding at Stockport Town Hall’s Marble Staircase and they will tell you it’s a tough one. It’s an awkward space with the wedding couple stood at the bottom of the staircase, the celebrant on the stairs and the guests further back behind marble pillars. You really have to get your position, lighting and angles right here.

I met Weiwei & Xiaofei in Costa Coffee, Cheadle Hulme earlier in the year to have a chat with them about their wedding plans. Originally from China, they have now made their home in Stockport so where else would they get married apart from Stockport Town Hall? After that meeting the couple soon decided to book me as their Stockport Town Hall Wedding Photographer.

This was a small intimate affair, many of the guests had travelled from China and even as far away as Chile to share Weiwei & Xiaofei’s day with them. While Xiaofei was waiting nervously on the Marble Staircase, I went to photograph Weiwei as she, her mum and bridesmaid arrived by taxi at the other end of the Town Hall.

After an amazing confetti throw, the family group shots were taken on the magnificent entrance on Stockport’s A6. Those who know the Town Hall will know there isn’t an abundance of outside space here and we had originally planned to head over to Bramhall Park for the bride and groom shots. I’d met Weiwei & Xiaofei here a couple of weeks before the wedding for their engagement shoot. Time constraints though, meant we had to change those plans and with a little imagination it’s possible to get some great couple shots just at the back of the St John Street entrance. Eagle eyed viewers will recognise the grey concrete building as Stopford House or the setting of the police station in Life on Mars. Gene Hunt and Sam Tyler were regular visitors here during filming of the cult BBC1 TV series.

After a few minutes outside it was time to photograph the speeches, which were held in the Committee Suite, were very emotional and were delivered very skilfully in both English and Chinese so everybody could understand and I even got a mention. After the cake cutting, it was time for me to leave and for Weiwei, Xiaofei and their guests to enjoy their wedding breakfast.

This was a wedding that promised much and delivered so much more. One I didn’t want to leave.

Weiwei & Xiaofei, this was one of the very best. Thank you for choosing me to be part of it. 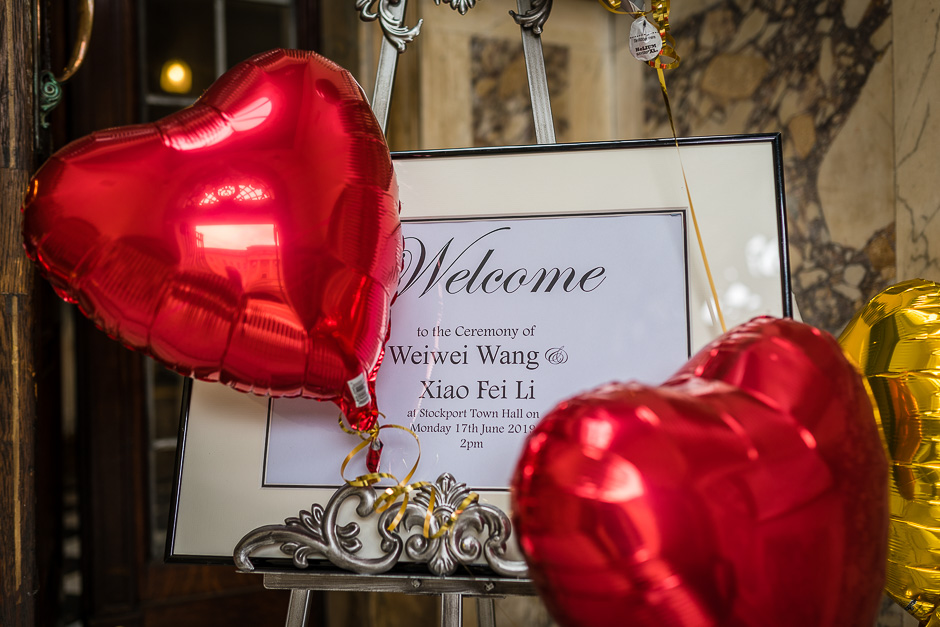 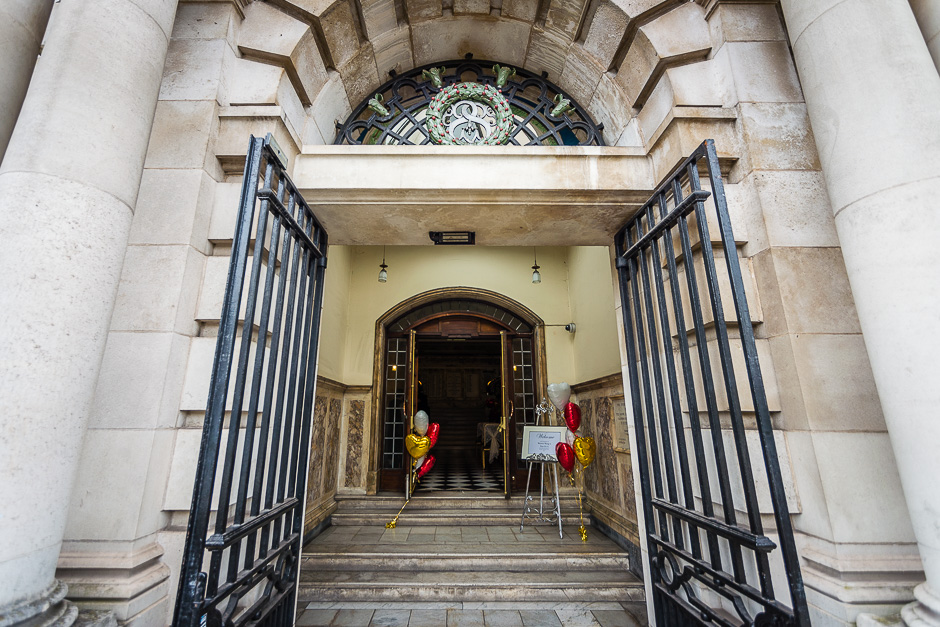 The Town Hall was designed by architect Sir Alfred Brumwell Thomas who also designed Belfast City Hall. It was opened by the Prince and Princess of Wales in July 1908. Prince’s Street is named after the route taken by the Prince and Princess of Wales on their way to the opening ceremony. The clock tower never had a bell, so that the patients in the infirmary opposite, wouldn’t be disturbed. The infirmary building now houses offices but is another of Stockport’s architectural gems. The ballroom takes up a third of the Town Hall’s total floor area. The clock used to be wound by hand twice a week until it was made electric in 2002. The ballroom was used as a hospital ward in World War I and also accommodated refugees from the Germany occupied Channel Islands in World War II. The Wurlitzer Organ, housed in the ballroom in 1999, arrived from Manchester’s Free Trade Hall. It was originally in the city’s Paramount Theatre. The Town Hall is known locally as the ‘Wedding Cake’ because of the tiered tower’s resemblance to a cake, quite apt really as it sees more marriages here than any other Stockport wedding venue. The gents toilets are a sight to behold, they are situated on the Regalia Corridor and are listed in their own right because of the Edwardian fittings used.

A sweeping double staircase is the crowning glory of the Town Hall, hand crafted with marble specially imported from Sicily at the beginning of the 1900’s. The Marble Staircase is a unique ceremony space,  where you can say your vows in front of your family and friends.

The Marble Staircase also offers a different backdrop to the norm for your wedding photographs. Because of the limitations on space it’s only suitable for wedding ceremonies of up to 70 guests.

These oak panelled rooms are full of character, each with stained glass windows, domed ceilings and huge chandeliers. The three Committee Rooms are available separately or as one large room for ceremonies of up to 100 people. Weiwei & Xiaofei only needed one room for their intimate wedding.

Are you looking for a Stockport Town Hall wedding photographer? Whichever location in the Town Hall you chose to get married, then I’ve photographed it. So why not get in touch for more details and to ask about availability on your wedding day? Prices and more information can be found on the wedding pricing page.